The Alaskan Malamute Assistance League is proud to announce the recipient of the 2018 Christenson Award! The aim of The Christenson Award is to recognize those people who are always there, working and volunteering beyond the call of duty, yet are seldom in the limelight. Congratulations to this year’s recipients!

Mr. Cory Shaver is the first 2018 recipient of the Christenson Award. Cory has been a volunteer with GTS Siberian Husky Rescue for three years and has lived at its Rescue Ranch for a little over a year. He often cares for up to 40 Malamutes on his own. This demonstrates his commitment: At a moment’s notice, he jumped out of bed and drove across several states to save 13 Malamutes in dire need. He drove them all (including a pregnant female with 10 puppies) back to the ranch in one night. He has assisted in several births and spent sleepless nights caring for more than 15 puppies from newborn to adoption age simultaneously. He plays with, trains, cleans, grooms, and loves them all and somehow still finds time to coach a baseball league and care for his own three dogs.

Mr. Shaver monitors and administers medications and vaccines, prepares meals, takes calls around the clock, and arrives on time for vet appointments, follow ups, and therapy sessions. He drives hours to assist malamutes about to be put down at shelters to assess the frightened and the confused, the sick and the abused, the “aggressive” and the “reactive.” He schedules and attends 98% of all meet‑and‑greet adoptions at the ranch to secure proper matches that will end in happy, healthy, loving forever homes.

“No” is not in Cory’s vocabulary. He has never once said “I can’t ” or “I don’t know how.” He takes on situations that most people could not imagine and handles them like he has been doing it his whole life. He remains calm, positive, and supportive through times of despair. He jumps in when most people can only look away from the pain and the suffering. 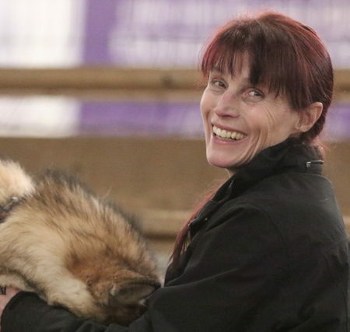 AMAL has awarded a second award this year, albeit posthumously. Many people in the malamute world have not heard of Janet Mendel-Hartvig, but some knew her well as a malamute lover and an agility enthusiast. And volunteers at Washington Alaskan Malamute Adoption League (WAMAL) got to know her as a generous benefactor and one of the good humans we all hope to be.

Janet, when she knew had little time left in this world, reached out to WAMAL with the offer of an incredible gift, a gift to be used to nurture rescue malamutes in our care–and for dogs that will find their way to our care in the future.

Because of Janet’s gift, WAMAL has been able to purchase a small piece of rural property near Seattle to develop into a temporary home for malamutes waiting for adoption. We wish to publicly acknowledge Janet and her incredible generosity. Janet was someone who made it a point to make a difference, and did. She passed away in February, 2018.